The return to reality (or the mysterious meaning of monasticism) 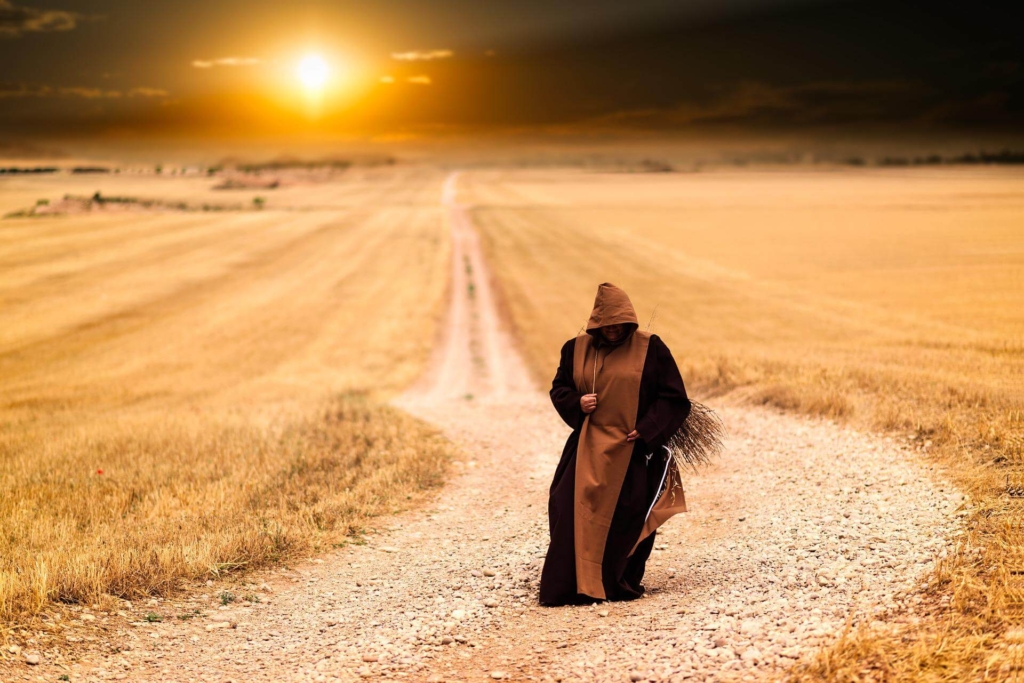 Many years ago, when I was a young psychologist, in my thirties, I was contacted by a mother, who was quite desperate at the time.
Her son, who was about the same age as me, was in a delirious state, living alone in an apartment, not going out onto the street and not allowing anyone to enter it.
His mother had to limit herself to bringing him a daily bag with the day’s food and leave it there at the door of the flat, ring the bell, and when he was sure that she was no longer there, he would pick her up.
If she so much as glanced at him to try to see him and communicate with him, he would become very violent, hitting and shouting.

They asked me to call him on the phone, as mobile phones didn’t exist yet. I did and he was kind enough to allow me to visit him. There was no way I would have wanted to come to what was, at that time, my surgery.

The day I went there for the first time, he met me in his underwear and the apartment was full, literally full of rubbish, everything he ate or used he threw into the toilet, from leftovers, pots and pans, plastic plates, everything.

He picked up a chair full of debris, tilted it so that the objects and debris fell into it and told me to come and get it.

And we began to talk.
At no time did I make the slightest reference to why he was living like this, in these conditions, nor to why he was semi-naked or why he didn’t communicate with his parents and brothers, let alone his mental state.
On the contrary, we engaged in a conversation about life, from the point of view of the utmost normality.

I didn’t perceive him as mentally ill, although I had it, I never do, and not because he didn’t have a mental disorder or because I have a very optimistic view of the possibility of overcoming them, but because as a psychologist I prefer to work with the possibilities of improvement open to me.

The conversation was guided by him, the delusional contents were interspersed with “normality”, sometimes I would intervene by agreeing or disagreeing with him in certain aspects. My intention was that he should not be treated with condescension but with respect and empathy.

He asked me personal questions or questions about my profession, I could ask him about any subject, except those referring to his disorder, completely normalising his condition. Questions like “have you seen this film, because a few days ago I went with my partner to such a place, have I tried a restaurant that you would like, etc.”.
I never looked at him as a bad guy, I never questioned his intelligence, his personality, his desires, why he had come to be like that, I always treated him honestly, as an equal, as could not be otherwise.
And the conversations always took place under the same circumstances: he in his underwear and wrapped in rubble.

Until one day, at about two o’clock in the morning, the phone rang at my house. It was him and he asked me: “Damián, do you think I would make a good monk?” to which I replied: “Of course, I think you have the qualities to be one”.

In the end, he left the apartment, went back to his parents’ house, resumed the university degree that he had abandoned some time before, and managed to finish it.

Years later, unfortunately, he died of a physical illness.

My explanation is as follows: I entered into his delirium without questioning him, I tried to gradually connect him with reality, I generated a situation of genuine empathy and he gradually abandoned his psychological depression through a process of reconnection with his own being.
We created a good and trusting therapeutic alliance.
He will never again enter a delusional situation, neither behaviourally nor mentally.

The suffering is reversible and, in the face of fragile structures that have been damaged, the possibility of psychological breakdown is a fact. But the cure of the soul, -the title of a book by Thomas Moore-, is essential to return to the reality from which someone has been able to escape because it was unbearable.

The diagnosis is sometimes worse than the illness itself because, on many occasions, it is damning.
And it is not that the psychologist or psychiatrist does not know what it is like, on the contrary, it is necessary to know it, but that the prognosis should not be limited only by the therapist’s own limitations or beliefs. And all this, always, from a realistic, prudent position and without any kind of self inflation.

The question that remains pending is that of “being a monk”. We never talk, or very little, about spiritual or religious matters (I’m a believer) but a little bit of it came together and dissolved the delirium.

The human psyche is a mystery that, fortunately, also escapes any attempt to explain it in a reductionist way.